England's women's team leverage students' interest in football to teach the science behind the ball.

The day comprised of multiple activities, each carefully designed to enrich the school curriculum, aiming to inspire a new generation of footballers, whilst exploring the science behind the ball and challenging perceptions around women and girls’ football.

Oasis Academy Sholing students were given the chance to engage in debate around sensitive issues within sport such as BLM, disability and sexism.  Students also had the opportunity to create and submit competition entries to push for equal access to football in a response to a call from the England Women’s football team to #ChangeTheGame.

Students also engaged in activities exploring the roles which biology, maths and physics play in the success of an elite sports team, such as reaction and power tests.  To finish the day students spent time meeting inspiring role models including members of The Football Association (FA), Southampton Saints FC and other locally based STEM organisations.

“It was a fun day, with lots of great opportunities and we got to hear some great advice and motivation from lots of amazing women.  We also got to have a go at some football skills and find out how data analysts, physios and coaches use science in their jobs”

“The STEM Football Festival allowed students to see science, technology, engineering and maths in a different light. It’s been so useful to use a context such as football to help students explore sometimes complex topics”  Mr Amos, Teacher of Science. 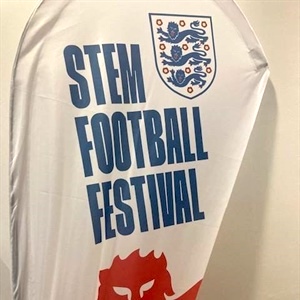